Part 1 – A Story of Restoration Part 1 – A Story of Restoration at Bill Rawles Classic Cars

NUE 854 and its first Owner

I guess we all must know that in 1952 Donald Healey conceived a new sports-car: the revolutionary Healey 100. History records so famously his ground-breaking deal with Austin…..and the Austin Healey 100 was born. The very first cars were the 19 hand built aluminium bodied pre-production prototypes made at Healey’s own Warwick works – the ‘Warwick 100s’. NUE was the 15th car of the batch and designated AHX16 by the Warwick works.

Of these unique cars, a few were built as development cars (and scrapped by the works) or works racers (NOJ 391, 392, 393 etc.). Of the Standard Austin Healey 100 cars issued with BN1 Chassis Numbers in the batch, NUE 854 was the first produced and delivered as right hand drive. About half of the Warwick 100s have been lost over the years. Of all 100s existing today NUE 854 is believed to be the ninth oldest Austin Healey car ever built. It was first owned and rallied by the illustrious Miss Betty Haig who purchased it from Donald Healey; it was registered NUE 854 on 16th July 1953. Betty Haig was a formidable Rallyist. She campaigned through the 1930s to 1960s and it is said she successively owned around 60 competitive cars over this period. There is much written about her, but for us today looking back, the pinnacle of her career must be the fact that in 1936 she won the Ladies Motor Rally event at the Berlin Olympics in a Singer. A Grand Niece of Field Marshall the Earl Haig, she won many such events. In 1953 and 1954 she campaigned NUE 854. Events included the Great Auclum Trials in September 1953 and the 25th Jubilee Rallye Paris – St Raphael Feminin in March 1954, where she came first in the over 2 litre class and 7th overall, winning a Coupe de Vitesse.

Including one long term owner from 1983 to 2011, the car had other owners who, at least in the early days, clearly used the car as it should be used i.e. driven hard! The previous owner made a website about NUE 854 which contains a bit more information about the car. 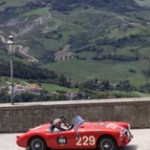 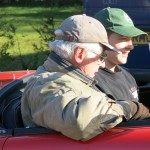 Jack Rawles grabs a ride in my MGA 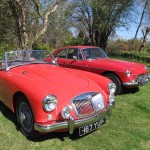 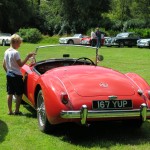 Attracting the attention of all ages 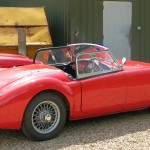 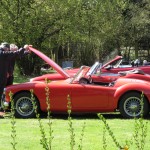 NUE 854 is a special car originally owned by a special lady. How did she (the car, not Betty!) become the apple of my eye? I’ll keep the story short; Lady Luck played a large part. I am a Mechanical Engineer and have always been enthused by motor cars and development. At University I owned a BSA Scout. How many have heard of that? It is a poor man’s version of an early T series MG, but with front wheel drive. I had it for 5 years and in 1963 went on honeymoon in it. The car is long gone, but I am very lucky to still have that same, very understanding, wife! I remember lusting after MGAs and Austin Healeys – but they were well beyond my pay grade. After that, ownership was from Mini’s through to BMW’s, until my brother Steve invited me to co-drive on the 2012 Mille Miglia in his ex-works (Pat Moss) MGA. Well that was that I was hooked. I soon bought a 1957 MGA from Arizona (unseen!) and spent 18months restoring it. I still have the MGA and it is a very beautiful car and wonderful to drive. In my MGA gaining Jack Rawles as an extra passenger

So, answering the original question “How did I come to own NUE 854?” Just about the time I finished my MGA, early in 2014, my brother Steve called me to say that he had made an offer on NUE 854. The offer had been accepted but he ultimately could not go through with it, so would I like to pick it up from there? I looked hard at the car and its history and decided to become the next proud owner/custodian of NUE 854. The car was ‘scruffy’ but totally sound and very usable

The car was ‘scruffy’ but totally sound and very usable. The all-aluminium body was intact and there was nothing more than the usual surface rust on the chassis. I spent some months getting used to its foibles. It is a very different driving experience to my MGA. The MGA is very well behaved and very agile (for a 1957 car). To me, NUE 854 was a beast by comparison, e.g. worm and peg steering (unlike the precise MGA rack and pinion), I had to be careful of the right foot (the car is about the same weight as my MGA, but clearly has much more power) and I had to look out for understeer (probably due to the big 100 engine, rather than the modest ‘BMC B’ unit in the MGA). I rapidly came to understand that those are some of the endearing characteristics and soon came to love driving it.

But the ‘scruffiness got to me in the end. I decided to carefully restore the car, ensuring it emerged ‘as original’

Part 1 – A Story of Restoration

← My First Weekend of Healey Racing Part 2 – The Restoration Continues →

4 thoughts on “Part 1 – A Story of Restoration”